Home » What Society’s Greatest Leaders Show Us about Work

What Society’s Greatest Leaders Show Us about Work

Loading...
Read Summary
Summary
If you want to rise to the top, you need to create as much value as possible. The message is also pretty simple: the more value you create, generally, the greater your fall will ultimately be when you stop creating value.

Growing up, I was always watching boxing on television. I will never forgot watching Muhammad Ali knock out numerous people and chant that he was the “king of the world” and the “greatest boxer of all time”. There is an excitement watching greatness and seeing people who seem to defy the odds wind up completely on top.

I remember watching Muhammad Ali fight Leon Spinks. I was with a babysitter on February 15, 1978, watching the fight on a small black and white television on a coffee table in our living room. The babysitter and I were certain Ali would severely beat Spinks. At that point in time, like many boxers who came after him, Ali was considered unbeatable.

Spinks won the fight, and it was considered one of the biggest upsets in boxing history. Even today, I am astonished by the loss because it was so unexpected. It was only Spinks’ eighth professional fight, and this was the fewest fights in which any boxer had won the world heavyweight title. Leon was featured on the cover of Sports Illustrated on February 19, 1978. 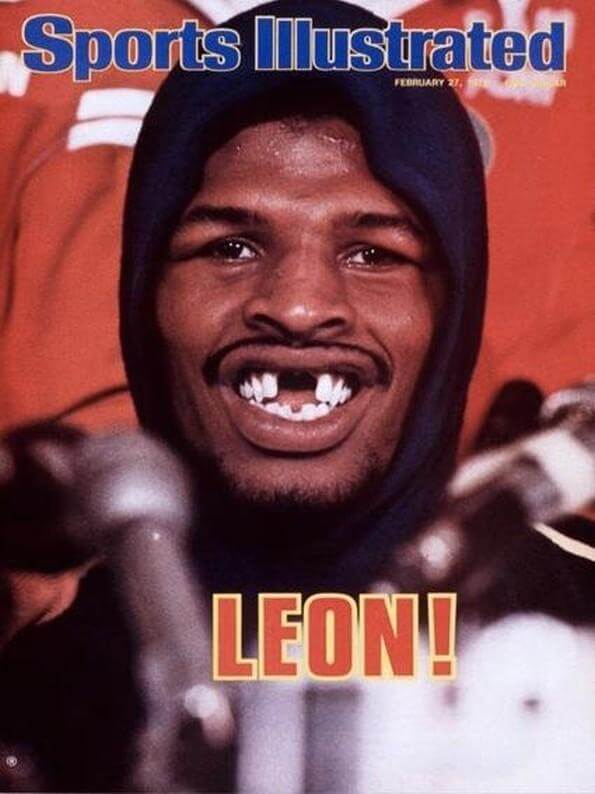 Today, Spinks is penniless and working in Columbus, Nebraska in a YMCA:

Today Spinks has swapped his red Everlast gloves for yellow Rubbermaid gloves and earns $5.15 an hour working as a cleaner at a YMCA. The only thing he punches is a time clock; in between he scrubs floors and never complains. Local kids stare at him and ask for advice, but others take cheap shots at him in bars. He has arthritis, walks with a limp and suffers from dementia, caused in all probability by the beatings he took in a career that peaked early and ended far too late. But you still wouldn’t mess with him: he has powerful arms and a thick, strong neck. Only the famous gap-toothed grin remains as a reminder of who he once was.

Leon is better off than he was in the late 1990s, when he lived briefly in an East St Louis shelter for the homeless. http://observer.theguardian.com/osm/story/0,,1720894,00.html

Boxers, society’s “gladiators”, are fascinating to study. When you think it, the champions ultimately always fall.

It is interesting that the men who were formerly the most feared warriors spend the rest of their lives as weak and powerless. This, I would observe, is what we do to society’s gladiators and leaders. All societies do this. We elevate people, and then we tear them down. If you want to be the best at anything, you need to bear the price.

When I think about leaders, I am often struck by the contradictions in leadership. People are often elevated to the top and then shot down. Rock stars, boxers, businessmen, actors, and beauty queens all become vulnerable once they rise high enough.

It is almost as if leaders are made so they can be raised and then tore down. They rise high and then are reduced to a shell of their former selves. What purpose do these leaders serve for the society? Do we need to have it proven over and over again that leaders are vulnerable just like everyone else?

Why is it that people who rise so high ultimately fall so low?

A few days ago, I was picking up my daughter at Brittany Spears’ former house. It is the same house she lived in when she shaved her head and was carried out of the home in a stretcher while having a nervous breakdown. As I sat there in my car looking around at the house, I could not get the image of her being evacuated from it out of my mind.

Everywhere I turn, I hear one story or another about a celebrity having a nervous breakdown. My wife installed an app for US Magazine on my iPad which I read while I am on my treadmill. On a daily basis, there is news about celebrities who are in trouble.

When you think about the fate of people like Hitler, you can see that when things go poorly, one individual typically gets all the blame. This is something that society uses to keep itself together. Without being able to blame one person, they would have to blame each other, and that would cause the society to come apart.

What typically happens in society is that our most energetic, outgoing and successful people rise very, very high and then at some point are stopped. Usually, public opinion and the people around them turn on them. Why does the public and the world turn on leaders and the people who do great things? I am not sure, but I have a few ideas.

First of all, people who are exalted by society typically are exalted because they are able to create and see something that others do not. In the business sphere, they typically can see new ways of doing things or connections that others do not see. In entertainment, they may have a fresh way of doing and looking at things. In politics, they may embody the hopes, fears and aspirations of a society.

At some point, however, it becomes time for something new, and what was once fresh and desirable becomes old. The person who stands for the old way needs to be pushed out to make room for the new. The leaders feel an extreme contradiction from no longer being on top. Few leaders have the power to reinvent themselves and be something better and different. In fact, it is extremely rare.

Elvis, for example, was never able to come close to capturing the fame and power he had at the prime of his career. His later years were spent being quite depressed and not being anywhere near his former self.

Have you seen Axel Rose from Guns & Roses lately? He is a fat, unrecognizable version of his former self. His latest album, Chinese Democracy, was a complete failure.

The same thing happened with Michael Jackson in his later years as one lawsuit after another dogged him. He was never able to become anything near what he had been.

One of the only people who has ever really had a successful second act was Steve Jobs. He was elevated and then struck down, but he came back. The reason he had a successful second act was because he was able to create value. He came out with one great product after another and created immense value. In fact, Apple became the most valuable company in the world. This is quite rare and not something a lot of people do.

Most founders, leaders and others never have a second act. They have an inspiration and way of doing things, and it eventually wears out. How many “one hit wonders” can you think of in the music world, for example? They are everywhere. Most people succeed on a major scale only once. Then, they are torn down and society catches up with them.

Leon Spinks lost his rematch to Muhammad Ali, and the rest of his career did not go that well for him. While he had a few victories, his career was soon over. He could no longer win.

The people in society who win, who stand up for what a society wants, who entertain us and who give us work to do (business leaders) are the most important people for all societies. We depend on them for inspiration, leadership and progress. There is something built into each of us that demands progress.

The second this progress stops, we turn on those leaders and look for new leadership.

When a business has a few bad quarters and is not doing well, the leader of that business is generally fired. We bring in a new CEO. When an actor has a few bad movies, they may stop getting work. If a leader of a country makes a few bad decisions, we will overthrow them or vote them out. In some societies, they are even killed.

What does all of this mean to you? First, it means that you need to understand what leaders are telling us.

Leaders tell us that you always need to be creating value. The second a leader stops creating value, the society is done with them. The greater the leadership role, the more value you need to provide. You are paid and advanced according to the amount of value that you provide.

If you want to rise to the top, you need to create as much value as possible. The message is also pretty simple: the more value you create, generally, the greater your fall will ultimately be when you stop creating value.

Filed Under : Featured, Getting Ahead, How to Succeed

How to Choose a Recruiter Based on Recruiting Style

By Harrison Barnes on May 11,2022
Recruiters use a variety of approaches, each of which has its merits; the best recruiters, however, use a combination of established methods. You need to work with a recruiter who understands these various methods, and supports your job search on multiple fronts. Exceptional recruiters are even more valuable in a bad job market, as their approach or combination of approaches will make the difference in whether or not you find employment.